This Bachelors/Masters assignment is for those who are interested in piezoelectric thin films.

Ion beam-induced surface modifications are at the forefront of modern materials processing. With applications ranging from coating of optics [1], selective layer implantation in silicon [2] and large area nano-structuring for functional surfaces [3]. In all such applications, the impact of ions into subsurface regions leads to rearrangement of surface atoms causing roughening or smoothing effects governed by the interaction’s geometry. In certain geometries, ripple formations have also been reported.

Understanding of the surface rearrangements is crucial for control of surface structure and properties for technological applications requiring large area nanostructures/smoothness. Models and experiments usually discuss the impact of ions at non-normal incidence at high energies (>keV), or near-normal incidence at low energies (< 500eV) and elevated temperatures [4]. Additionally, the impact of chemical interactions are generally neglected. These aspects are essential for ion-assisted depositions or surface functionalization.

This project aims to separate the chemical and physical aspects of surface restructuring upon ion irradiation for metal films at normal incidence using ions of reactive and inert gas species with similar energy transfer parameters. The student will have hands-on experience with ion beam exposure facilities and roughness characterization with atomic force microscopy and is expected to actively participate in interpretation of the physical mechanisms of ion induced morphology changes.

For today’s move towards electrifying the world, we need even more research, development and implementation of break-through electronics systems. This particularly holds, for example, for electric cars, solar energy conversion and other types of upcoming smart power systems. In the vast majority of these systems, some parts operate at high voltages (up to several hundreds of volts) while any control and interface electronics operates at low voltages (a few volts). For safety and immunity reasons, the interface between the high power domain and the control/interface domain must be galvanically isolated while data-communication between those domains is crucial.

To make a next step in fully galvanically isolated data transfer in a single silicon die, research was done at the UT (sponsored by NXP) that yielded the first fully silicon integrated opto-coupler. Such an opto-coupler basically makes use of light for data-communication via a light emitting diode and photodiode which are mutually galvanically isolated. See also e.g. https://www.utwente.nl/en/news/2019/12/287774/ut-invention-in-laser-focus-worlds-top-20.

We defined assignments that focus to a next step to enable smart power systems. In this, we aim at high-voltage (several kV’s) galvanic isolation through opto-coupling in an advanced electronic system formed by multiple smart-power ICs. Boundary conditions include fabrication in state-of-the-art technologies used for actual power ICs, satisfying the most stringent performance requirements (automotive grade 0), pursuing break-through concepts. This assignment is part of the “All Silicon Opto-coupling” project which is a joint project by NXP and the UT.

We defined a number of assignments:

Low-energy ion scattering (LEIS) probes the outermost atomic layer of a surface by backscattering of noble gas ions. Under certain conditions, also depth profiles up to 5–10 nm depth can be obtained. LEIS spectra of hydrogen containing samples have a background signal at the low energy side of the spectrum due to hydrogen atoms that are sputtered away and ionised by the noble gas ions used for probing the sample. Time-of-Flight (TOF) measurements can separate the hydrogen ion signal from other sputtered elements and backscattered ions. A previous bachelor student project has shown that the thus obtained hydrogen signal is indeed proportional to the hydrogen content of the sample. In this assignment, the focus will be on a better understanding of the detection depth of hydrogen by LEIS, the possibilities for quantification and the detection of hydrogen in sputter depth profiles. 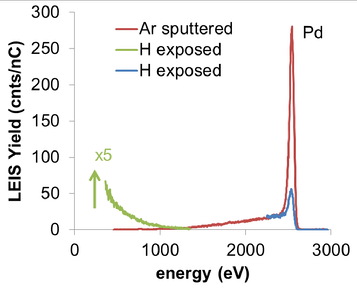 LEIS spectra of clean and hydrogen exposed Pd. The red and blue line show the signal of backscattered He+ ions for Pd cleaned by Ar ion sputtering and after exposure to H atoms, respectively. The green line shows the signal due to sputtered H ions.

Astatine uses cookies to recognize your repeat visits, as well as to analyze the traffic on the site.
By clicking accept, or using our site, you consent to the use of cookies unless you have disabled them.
Accept Read More
Privacy & Cookies Policy

This website uses cookies to improve your experience while you navigate through the website. Out of these, the cookies that are categorized as necessary are stored on your browser as they are essential for the working of basic functionalities of the website. We also use third-party cookies that help us analyze and understand how you use this website. These cookies will be stored in your browser only with your consent. You also have the option to opt-out of these cookies. But opting out of some of these cookies may affect your browsing experience.
Necessary Always Enabled
Necessary cookies are absolutely essential for the website to function properly. This category only includes cookies that ensures basic functionalities and security features of the website. These cookies do not store any personal information.
Non-necessary
Any cookies that may not be particularly necessary for the website to function and is used specifically to collect user personal data via analytics, ads, other embedded contents are termed as non-necessary cookies. It is mandatory to procure user consent prior to running these cookies on your website.
SAVE & ACCEPT